Over almost ten years of photographing weddings, I’ve got the impression many people don’t immediately know the difference between scripted reality and the experience of a real life moment at their wedding.

They’re often compared, as if they were similar things…

… and I don’t believe they are in anyway comparable.

They are complete opposites.

I think this is often because people haven’t seen what the other really means to them, long term. So let’s break it down as this one is quite straightforward.

So the basic concept of any sort of scripted reality is that the majority or usually all parts of the story or situation are being scripted. Meaning the outcome is predetermined and already known.

You may have seen such photography series where you have a couple running through a field with a balloon/prop/insert gimmick, or where a bride and groom run through puddles on a rainy day and play with umbrellas, or where the bridal party are made to orchestrate some sort of situation where they cover their faces with their bouquets, and find it hilarious, obviously.

Those are all examples of predetermined outcomes, or scripted realities.

These scripted images lack the crucial and fundamental value of a photograph with a lived, unscripted experience.

Take this image below.

This is Mari (far right) and her mum, sister, and father. Mari’s family are hanging out with her in the morning before the ceremony, to try and help where they can and be with her in this important day in her life. One of Mari’s friends had made these beautiful pieces of hand crafted jewelry, which she was gifted during the morning. They were playing around with how and where to put the jewelry and her mum, I think half joking and also just not sure what on earth to do, suggested putting them on her obi (the sash on her kimono). This image recounts half an hour later, where her sister is making a joke of the idea, as siblings often do. Parents can be funny.

One. Notice that this image has a real story behind it, which is articulated through the photo but also forms part of their actual relationships that they share? That I didn’t force them to strike a pose or do anything daft (and let’s be honest, they have traveled half way around the world, the last thing Mari wants to be doing is wasting time re-creating some staged photo). That what’s happening in the photo is light-hearted, fun, personal?

Two. With the above in mind, do you think that this image may then mean something different to them, compared to if I’d randomly scripted an idea for them to play out? This image has human details that can’t be manufactured or scripted. And then in ten years time, it’s a real, lived experience, a true memory that they’ve shared.

Not just something everyone else has done.

For me and my clients, this is a significant and fundamental difference.

We’re not interested in mimicking others or living up to some highly varnished, magazine-friendly idea.

We’re about living fully in your own unscripted life moments. 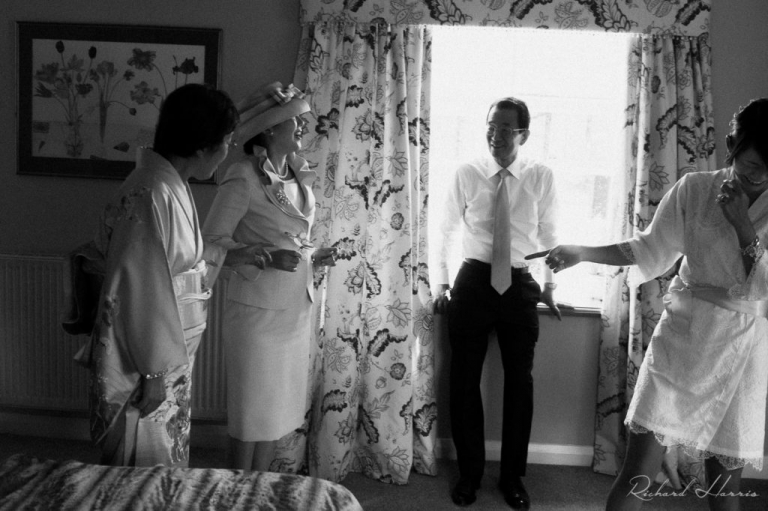 “When I started planning my wedding, I knew I wanted a photographer who can capture the special moment in the most natural way possible; not in a form of ‘group photo’ or clearly ‘staged’ pictures you see everywhere on other people’s social media page or websites, but in a more creative, natural and artistic way.

Richard is clearly a very talented photographer who is capable of delivering the pictures exactly the way you always dreamed of. He has the ability to capture the most precious moments in a form of breathtakingly stunning pictures.

When the photos arrived, we were blown away to see how he captured the very essence of the most precious moments on our special day. I would describe each and every one of them as ‘art’ and I love the way he captured them all.”

« A favourite, from all the weddings you’ve ever photographed?When recreating a beautiful wedding photo, don’t forget this »