A favourite, from all the weddings you’ve ever photographed?

It’s tricky to pick just one photo from all the hundreds of weddings I’ve been commissioned to photographed.

And I’m not being blasé when I say “hundreds”. As I edge towards ten years photographing my clients intimate celebrations, it’s just a natural accumulation. I genuinely love being able to photograph my clients in some of the most intimate moments in their life.

Most recently since I’ve been photographing their family lives as well, I’ve reflected on the idea of “access”. Having the trust of people to photograph a day in their life in the most authentic and sensitive way possible is a real privilege. That trust allows me behind the scenes and in between the lines, to capture those unique feelings in peoples lives – without that trust, it would be far less interesting, far less meaningful.

Yet hundreds of weddings means many more individual photos, many times over.

So when I’m asked if I have a favourite photo, from all the weddings I’ve ever photographed… it’s more a question of where on earth to start as much as anything else.

Is it really possible to pick just one image above the others?

I don’t think it is to be honest.

But people often ask and I was asked today, so here’s one that I really like.

And even just looking back at it again now, I can’t but laugh. The theatrical detail of what’s happening is quite engulfing, and the semi-wide angle perspective I’ve chosen really puts you in at the scene, as if you’re one of the guests involved in the joke itself.

As a photographer I’m always looking for “photographic gestures”, by which I mean not overly formulaic, or dramatic, or ‘elongated’ as you may have seen in the painted world before photography (and which early photography naturally tried to mimic). These are the more human, half gestures, broken lines, that all lead us to the feeling that what we’re looking at is more real than anything we could possibly see. That it did happen and this isn’t some sort of staged reality or orchestrated image. And you can see this in abundance throughout this image below.

But then we come to the human story playing out, which is what brings me back to this. I feel it’s almost easy to make something appear dramatic or “interesting” through angles, lighting, pose, etc, but that would just feel disconnected or superficial to me. Here we have Gemma’s Dad giving a speech, very casually in the early evening, but fully capturing the room. And he’s done the typical “dad thing” of throwing some embarrassment towards his daughter – you can see as he almost takes note the significance with his gesture, far left of the frame.

The reaction and timing is something that just takes me back to that moment every time I see the image.

Is it my favourite image, from every wedding, ever? I couldn’t possibly say, but I think it’s special in it’s own right. 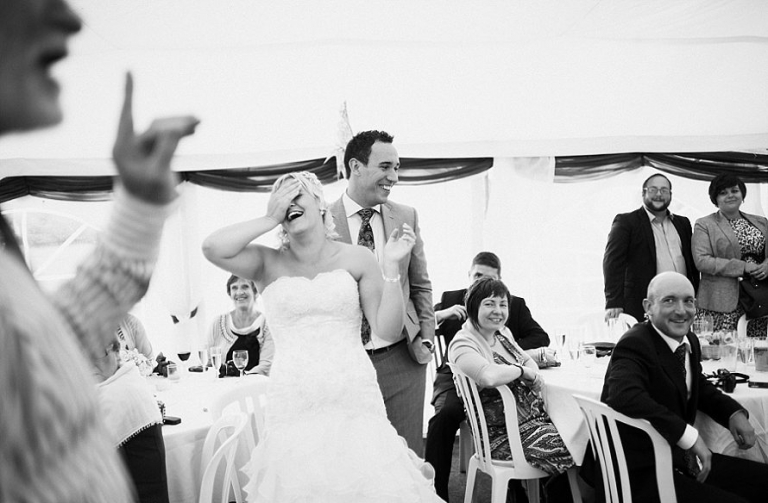